Peter began his fishing career in Tappan, New York. After cutting his teeth on bass, carp, catfish, bream and trout at the age of 3, soon it was onto bigger and better things. His dad began taking him saltwater fishing off the coast of Long Island and New Jersey where his interests quickly turned to striped bass and tuna. His first striped bass was within eyeshot of the World Trade Center in downtown Manhattan.

At the age of 10 Peter's family began vacationing on Miami Beach, where his obsession with billfish was kindled after catching his first sailfish and a hammerhead shark on the same day. He couldn't get enough of the sunshine state, so when it came time to go off to college in 1985, he chose the University of Miami where he built his classroom studies around an aggressive "blue water" schedule. Throwing a cast net on live bait and catching sailfish before class was routine and usually happened 2 times per week. The rest is history!

After graduating college, Peter went to Costa Rica and caught his first sailfish on fly in 1992 and then his first "Billfish Grand Slam" in Venezuela in 1993. He then became the youngest ever Angling Director of the prestigious Miami Beach Rod and Reel Club in 1993.

In 1989, Peter and his good friend Chris Toomey started the fishing team called "Get Lit" and have fished high profile events for over 23 years and continue to do so. Peter and his team Get Lit have won or placed in over 110 high profile billfish tournaments. Some of their wins include: 3 Time World Sailfish Champions, 3 time winners of the Cheeca Lodge Presidential Sailfish tournament, Florida Swordfish Series, Dewars 12 Billfish Championships, Miami Raft Invitational, 2 time K-Rock Classic winners, Bob Lewis Billfish Challenge and 4 time Silver Sailfish Derby Champions.

When Peter is not fishing, he is a devoted husband and father of 2. He is also a TV host, producer, expert marketer and spokesperson for various fishing and non-fishing related products. He has appeared in numerous national commercials as well as over a hundred ad campaigns. His most recent ads include: Budweiser, Bass Pro Shops, Ocean LED, Norelco, Ford, Wrangler and Home Depot.

Peter is also the creator, director and host of the Telly Award Winning show Bass 2 Billfish on NBC Sports 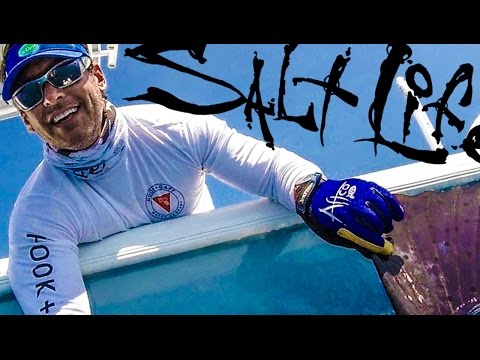 Peter Miller shows off the Catch of the Day: Sailfish! For the best apparel for living the salt life, visit ?? http://bit.ly/1Nld8VH Learn more about Salt Life: http://bit.ly/1RjFvd1 Follow us on ...