Colin was born April 18, 1975 in Santa Monica, CA. His Salt Life began at age 5, with the support of his parents, when he started surfing the beautiful beaches of his hometown, San Clemente. After a stellar amateur surfing career, he turned pro at 18, right out of high school. The next year in 1994 he won his first major event in Huntington Beach at the US Open of Surfing. He would later go on to repeat that win in 2007. He was the 4X winner of the high profile Toes on the Nose Rabbit Kekai Classic at Boca Barranca, Costa Rica. Although Colin has won a number of prestigious surfing competitions, he is best known for claiming 3 ASP World Longboard titles. His first title came in 1999 in Australia. He later repeated this feat in 2001at Jeffreys Bay, South Africa, in and 2002 in Cabo San Lucas, Mexico. He has been lucky enough to travel the world surfing longboards, shortboards and SUP to places such as South Africa, Europe, Japan, Brazil, Indonesia, Peru, Fiji, Morocco, Canada, Mexico, New Zealand, Australia, and the Maldives.

Surfing has not only provided travel, glory, and support for his family but has also opened up opportunities in other professions. He has been able to expand his expertise into the movie and TV industry as a surfing stunt double. He has worked on shows such as Baywatch, Beverly Hills 90210, and most recently, the big screen film, Chasing Mavericks.

Colin has found a new love in the sport of Stand Up Paddling (SUP), one of the fastest growing water sports. He loves the aspect of positioning his paddle on the wave face to add speed and power to his surfing. One of Colin's biggest honors was being selected to represent the United States at the 2012 ISA World Games of SUP Surfing in Peru. He has competed in a handful of the Stand Up World Tour events and has found himself in the finals every time. He has also ventured into the racing aspect of the sport and has had many successful race finishes. Some of his favorite races have taken place in Lake Tahoe, Utah, Cabo San Lucas, Catalina to Dana Point, and of course the granddaddy of them all, the Battle of the Paddle in Dana Point, CA.

Colin lives in San Clemente, CA and loves nothing more than hanging at the beach and sharing his stoke for the ocean with his wife and four children. Colin also has a passion for teaching others how to surf and stand up paddle and is lucky enough to spread his love for all things water, as a surf instructor. His dedication to the ocean and mastering all crafts made for wave riding embodies the motto, Live Salty!! 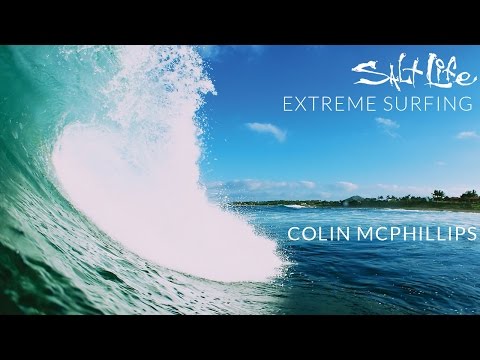 The four partners of Salt Life are avid "watermen" and extreme surfers, free divers, spear fishermen and blue water fishing experts. All have traveled the globe surfing, fishing and diving in pursuit ...