Captain Cameron Kirkconnell's family is from the Cayman Islands and diving, fishing and ships have been at the center of their lives for almost as long as the islands have been on the map. They are always looking for that which hasn’t been done, specializing their gear and finding the perfect recipe for every location and fish they pursue.

He's 33 years old and works as a Captain on huge ships getting paid to travel around the world and with a four months on and off schedule he has been able to spend months at a time in the best known dive spots in the world. Even better, he's been able to travel with his friends and family and discover the newer and better dive spots that have been the envy of the rest of spearfishing world.

He's lucky to have scored some great fish along the way; his top favorites being:

He was lucky enough to be chosen as one of the original hosts of the show SPEARGUN HUNTER by Terry Maas. He took the team overseas to a secret spot and within the first two days shot and landed a World Record sized Pacific Blue Marlin. On that first trip he also landed more than a dozen big Dolphin (Mahi Mahi), Wahoo, giant Trevally and Yellowfin Tuna. Terry captured all of the action on video and but the video has never made it to TV and he obviously am not the host. It was a great experience but his refusal to let the video of shooting the record Marlin be shown on National TV did not go over well with the producers. It worked out good, they have a great host and he believes they kept even more restrictions and bad publicity for the sport from coming down on them by keeping the fish private. He has nothing against shooting billfish, but the hypocritical Sportfishing World will only bring more harm upon the sport they value so much.

It also worked out well because he can still go to all the best spots in the world and not worry about giving them away on national TV!

Over the years he has always written for different magazines and put videos up on the web and through Riffe, Spearboard, Spearfishingplanet, Facebook, his seminars in dive shops and emails answered hundreds of question on everything from gear to girls around the world and the best combination in between for spearfishing.

He admits he doesn't know everything there is to know about the sport but he has gathered information from every corner of every ocean and retained it and he hopes that he can help every diver out there dive safely and enjoy the sport for years to come.

Cameron says the best part about spearfishing sport is all the people you meet around the world and learning from every diver you encounter whether they are in Alaska or South Africa or an inland lake in Missouri.

I live in Stuart, FL but am traveling constantly guiding Spearfishing trips around the world. We've been blessed to have 30+  World Records in the past 5 years in a few dozen countries visited, and 20+ World Records personally.  I am the Captain and Coach of our US National Freedive Spearfishing Team, an Unlimited Tonnage Master Captain,  Silver Lifesaving Medalist recipient, Father, Husband and constant outdoorsman and waterman.

Basically, we put people on the fish of a lifetime, at the ends of the earth, and capture it on photo and video so they can cherish it for all time. Spearfishing and fishing are the main focus of our guided trips while surfing, hunting, paddle boarding, and time with the family fill my time in between.

Here are a few of our trips

Family is from Cayman Islands, raised in Florida.

Retired from working as a ship Captain in 2013 to Guide/photo/video full time.

Most of my clients own their own yachts with trip and quad engine tenders and they have taken 30+ World Records in the past 5 years.

Wrote the book, manual and class on Spearfishing for FII

IUSA Athlete of the Year

Multiple Circumnavigations, all Oceans, Antarctica and the Arctic.

To read more about Cameron Kirkconnell, please visit his blog spearblog.com and freedive2spearfish.com 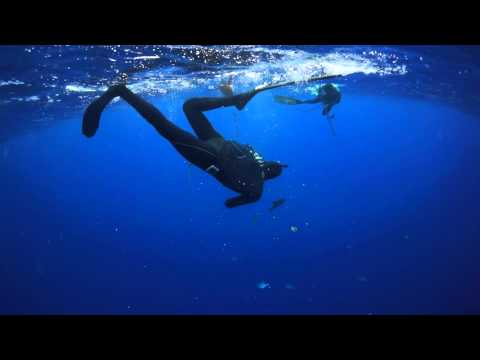 Spearfishing with Cameron Kirkconnell guiding our Kuwaiti friends to some fantastic Yellowfin Tunas. These two fish are the average size that we see (160-200 lbs) and on the small side of what we wa...