Heading into his ninth year as a Salt Life brand ambassador, Blake Koch has created a large fan base over the past five years while competing in the NASCAR XFINITY and Sprint Cup Series.

Prior to racing on four wheels, Koch began his racing career running motorcross at the age of 22 after graduating from Northwood University, and was considered one of the "top 20 motorcross riders in the state of Florida" for eight years before making the switch to NASCAR at the end of 2008.

Most drivers spend years in lower divisions before being recruited by a NASCAR team, however, for Blake Koch, the road was much faster. In 2009, with only 20 amateur races under his belt, Koch was recruited to be a primary driver for the Richard Childress Driver Development team in the NASCAR K&N West Series (formerly known as the NASCAR Camping World West Division). Koch completed his rookie year by finishing the season eighth in the final point standings and runner up in the Rookie of the Year standings.

Koch continued to compete in the XFINITY Series, in 2012, this time driving for Rick Ware Racing. As Koch’s career progressed and another season approached, in 2013 he signed on to drive full-time for SR2 Motorsports. Testing the waters with a new team, the Florida native signed a one-race deal with RAB Racing for the season finale of the XFINITY Series at Homestead Miami Speedway in November of 2013. Qualifying second, Koch was able to start outside the pole, and capped off the season with an impressive 11th place finish at Homestead Miami Speedway.

In 2014, Koch signed with TriStar Motorsports to drive the No. 44 Toyota Camry, earning three Top-20 finishes and nine Top-25 finishes. At the end of 2014, Blake Koch participated in the Sprint Cup Series, signing on with Go FAS Racing to pilot the No. 32 Leaf Filter Gutter Protection Ford Fusion. Re-signing with TriStar Motorsports for the 2015 NASCAR XFINITY season, Koch piloted the No. 8 Toyota Camry for all 33 NXS races, with LeafFilter Gutter Protection as the primary sponsor.

Koch and wife, Shannon have two children, Carter and Bailey and their dog, Junior currently reside in Huntersville, North Carolina. When Blake's not at the racetrack, he's living the Salt Life, wake surfing and fishing mainly. He also enjoys hunting, working out, and spending time with his family during his time off. As a race car driver, outdoorsman, Christian, and family man, Koch has created a major fan base in both the NASCAR community and the faith based market and will continue to do so for years to come. . 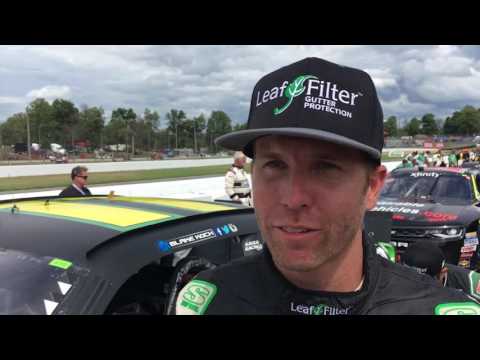 LeafFilter Racing - The Road to the Chase

https://www.leaffilterracing.com/ In the first ever XFINITY Chase, Blake Koch has qualified to battle his way with the top racers in the series. Starting the season with a brand new team – Kaulig ...